Nobody really knows when and how Sakra was created...but if we look at the time line it we will see it?s history.. Sakra?s roots are situated first of all in Wroclaw?s group formation called ?Sexgruppenführer? where three current Sakra?s members met for the first time and started to make music together: drummer Karlozz, bass Stupid Jack i guitarist Karasso. Before that Stupid Jack had played in ?Tarot? i ?Musk?, while Karasso (alias Rybsko) in ?Antares? and for a little while in ?Para Wino?. After an indefinite period of time ?Sexgruppenführer? suspended it?s samples because of disobedience of that time singer called ? Kosmita Golin.But they also succeeded. In 2002 they realised a demo record called: ?Teatro purpurowa galka?. Sakra, on the other hand has it?s orgins also in other Wroclaw?s band called ?Dust Blow?. Drummer Karlozz played there at the beginning, then guitarist Karasso and bass Stupid Jack at the end. They all said it was the great time... In 2003 they all met again in ?Exodus? trap in Wroclaw to start a new project, together with present Sakras?s trampeter ? Ms.Jula and Exodus?s trapster and singer of that time - Rajsiu.In May they had the first performance in the University of Wroclaw ? at the Slavonic Song Competition ? where they won the third prize, playing ska song made up by ?Distemper? "Spit ostoroznaja trava". In spring 2004 they decided to repeat the success and preformed again at the University. This time with ?Polemic?s? song "Ona je taka". Since then Sakra started to play regular samples. There were such band members as: Ms Jula (trampet), Mr Darecky (trombone), Stupid Jack (bass), Karasso(guitar) and Fryta (drums also in ?Seth? and ?Zaszyty?). Karloz at that time played in ?Henry Matise?.DanWoyteck appared in Sakra suddenly nad from the ground.... and he started to sing. Today he is the great Sakra?s frontman and singer. In May 2005 almost traditional, Sakra played at the Uni Slavonic Song Competition. That time with it?s own musical composition: ?Skartki?. An Auduence was impressed and great but jury annoyed with ska sounds disinguished Sakra by giving them geographical atlas(!)...it was really difficult (but not impossible) to share it among six persons. After that Sakra really became Sakra. They started to make up own music. There is a lot of different sounds in their minds from Ravel via Funkadelic, Paco de Lucia?e to Nasty Savage. They don?t go in one music direction and they just put their emotions somewhere between ska and reggae. 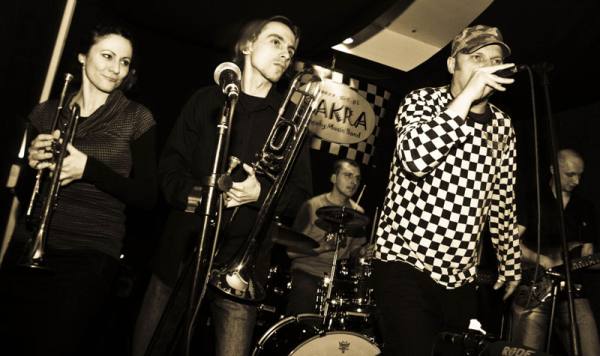