- Era One - The band was formed by Necrolucas which full war-name is Master of Depraved Dreaming and Emperor of the Black Abyss the Great lord Hziulquoigmzhah Cxaxukluth towards the end of 1996 as the embodiment of blasphemous scorn to christianity and moral laws as well as the glorification of perverse debauchery. However the name Anima Damnata was established in 1998 - few months before recording of the first demo. This stuff was never officially spread, Necrolucas and Bestial Crusher of Holy Prophets, which were the core of the band since the very beginning, decided to dismiss remaining band members and forgot them as well as this recording. They followed the path of the most extreme Satanic Death Metal. During next two years they kept the band alive writing the majority of new stuff. In year 2000 two new members joined the band: the vocalist Glaca and Necrosodomic Corpse Molestator on guitar and vocal, shortly thereafter the second demo was recorded. One year later Glaca was cut off but bassist Nocturnal Harvester of Christian Lambs and the Great Messenger of Subliminal Satanic Messages joined the band - this was the first, genuine Anima Damnata line-up. At the beginning of October 2001 the first official stuff titled "Suicidal allegiance upon the sacrificial altar of sublime evil and eternal sin" was recorded and released by Polish label Pagan Records as a limited CD/MC split (parted with Throneum) in November 2002. In August 2003 the second official recording titled "Agonizing Journey Through the Burning Universe and Transcendental Ritual of Transfiguration" was recorded and released on Pagan Records at the end of December 2003. In August 2004 Anima Damnata recorded MCD called "Tormenting Pale Flesh of the Syphilic Holy Whore". During the recording session Nocturnal Harvester of Christian Lambs and the Great Messenger of Subliminal Satanic Messages decided to leave the band, few months later Bestial Crusher of Holy Prophets followed his way. Together with their departure the Era One was ended. - Era Two - Year 2005 brought many problems with labels, rehearsal places and line-up. In February Necrosadistic Pavulon Injector and Ritual Devourer of Unborn Angelic Flesh joined the antichristian crusade as a bassist to form the new entity called The Unholy Trinity - the most powerful Anima Damnata line-up. In September the band signed an infernal pact with Canadian label Morbid Moon Records which released the "Tormenting Pale Flesh of the Syphilic Holy Whore" three months later. In September 2006 Anima Damnata recorded second full-length album entitled "Atrocious Disfigurement of the Redeemer's Corpse at the Graveyard of Humanity", which is now released through Morbid Moon Records. The year 2007 is the year of the redeemer's desecration. 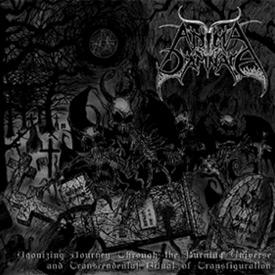